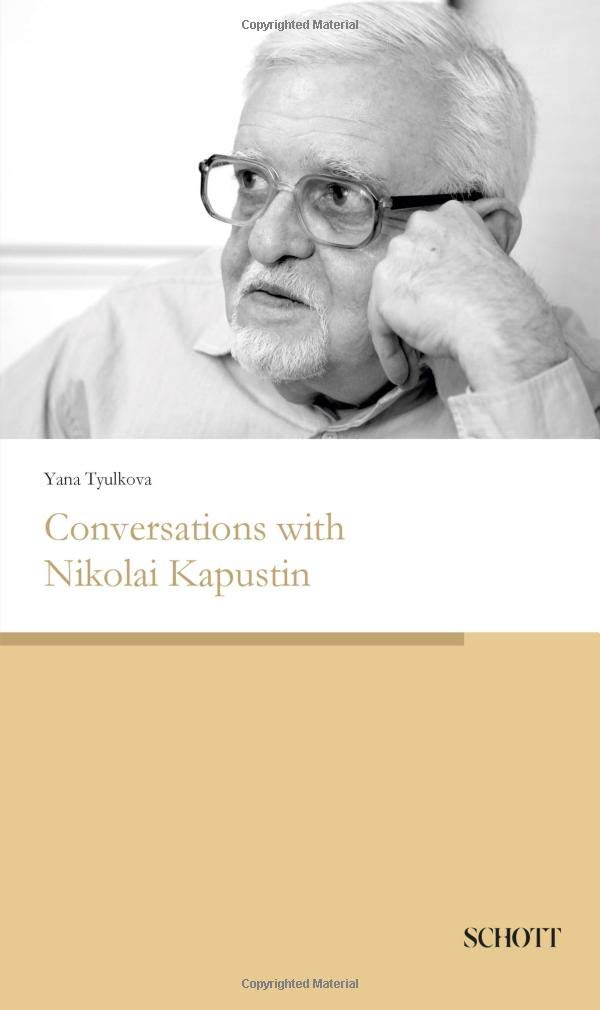 Those excerpts come from the book Conversations with Nikolai Kapustin (Schott, 2019), a series of interviews that act as an informal biography of the composer. Some low-quality scans of a few juvenilia are included in the book, along some comments from the composer. No content of the book is quoted literally, and the excerpts played in the video are solely for educational purposes. Notice also that the video is not monetized. 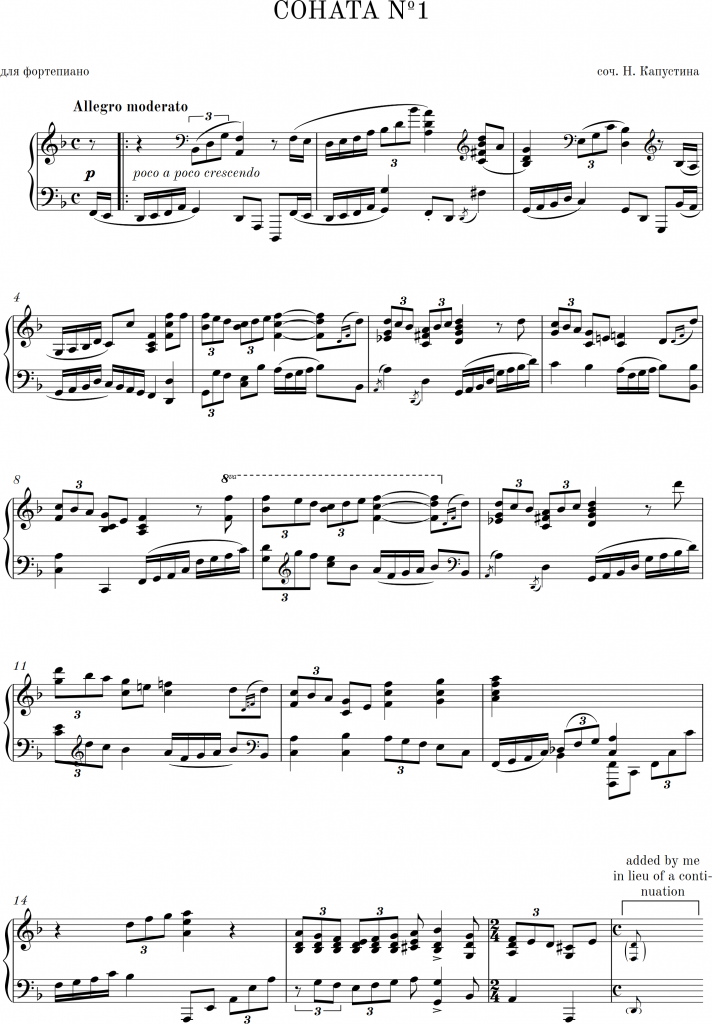 In the late 1940s young Nikolaj began to teach himself composition from books, much to the chagrin of his piano teacher, who believed this was a distraction from piano practise.

Kapustin claims to have written his earliest work, this sonata, in 1950, even though the manuscript is dated from 1952. According to him, another teacher prepared a fair copy for him, but the handwriting bears a striking similarity to Nikolaj’s own.

We have two excerpts, the first page of the first movement, and the last of the finale. The last page tells us almost nothing, it’s a virtuosic and loud V7-I cadence (typical bombastic writing of many young composers), and we have no idea of what the themes of the movement were like.

The first movement is a well-crafted first theme of a sonata form in a Romantic style. There isn’t a single bit of sloppy writing, and there’s a lot of detail. Notice how the first motive, first played in the left hand, is developed and reintroduced constantly, and how the textures are filled with bits of counterpoint. Young composers tend to introduce a ton of varied ideas, while Nikolaj sticks just to a few and builds tension by re-arranging them in different guises.

Notice also, that while he tends to stick to regular phrase lengths (2/4/8 measures), he adds a little surprise by turning a theme that should be 16 measures long into just 15-and-a-half, thus plunging into the transition (not included in the excerpt) a bit too early or purpose.

Having myself lurked on forums with a lot of beginner, self-taught composers, a work of such calibre is almost unheard of (whether the composer is 12 or 14). Furthermore, we must keep in mind that Kapustin had no access to internet and thus had access to fewer educational resources. 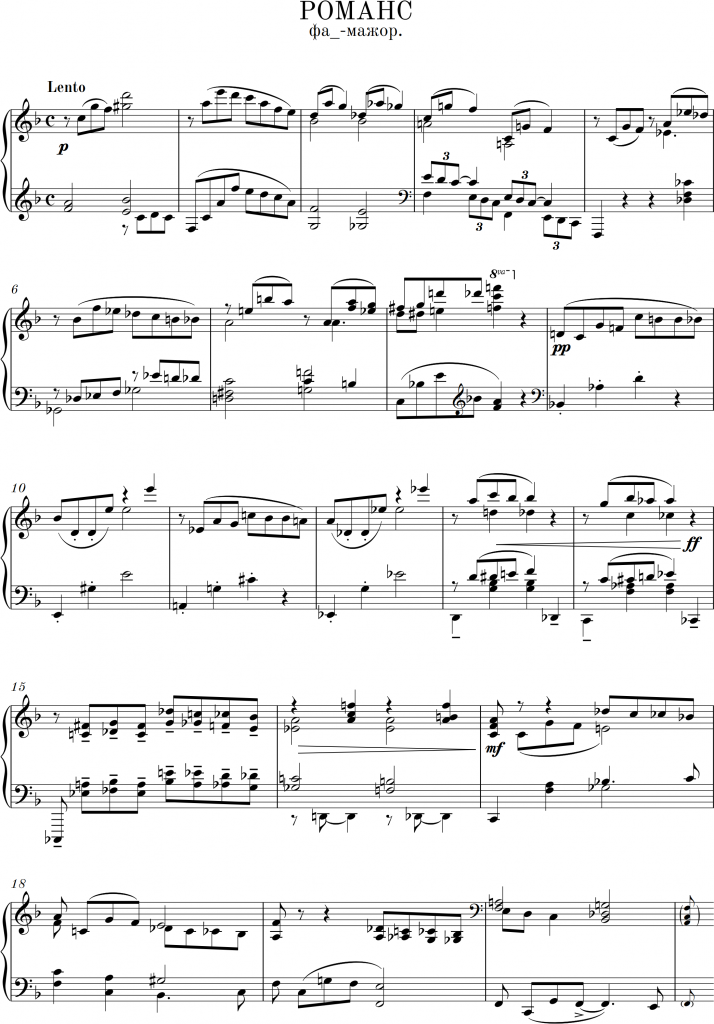 Kapustin kept composing, even though a great deal of the work is lost. While at the Moscow Musical College, he wrote a three-movement sonatina for piano. His piano teacher, Avrelian Rubbakh, wanted to have it published, but the qualifying committee (that included Tat’jana Nikolaeva and Alexandr Goldenvejzer) decided that only the finale was good enough. Kapustin refused to mutilate his work, so nothing came into fruition.

The fate of most of the sonatina is unknown, Rubbakh kept most of the score and only the slow movement, a romance, remained in Kapustin’s possession. Ironically, the piece survived because the composer discarded it, agreeing with the committee that it wasn’t good enough.

We only have the first page of the slow movement, where a theme in F major seems to be exposed in full. As in the sonata, Kapustin writes with a lot of motivic economy.

IMO it’s a fairly strange work. The theme seems to be divided into 3 sections (starting at meas. 1, 9, and 17). The first section presents the theme, but IMO the modulation in measure 5 sounds awkward, while the ending with the V-I cadence happens too soon and thus kills the momentum. The sequences of the mini-development (meas. 9-12) sound a bit wooden, and the mini-climax a bit unearned. It’s really a pity that the good bits are lost, someone should contact Rubbakh’s heirs and see what happened. 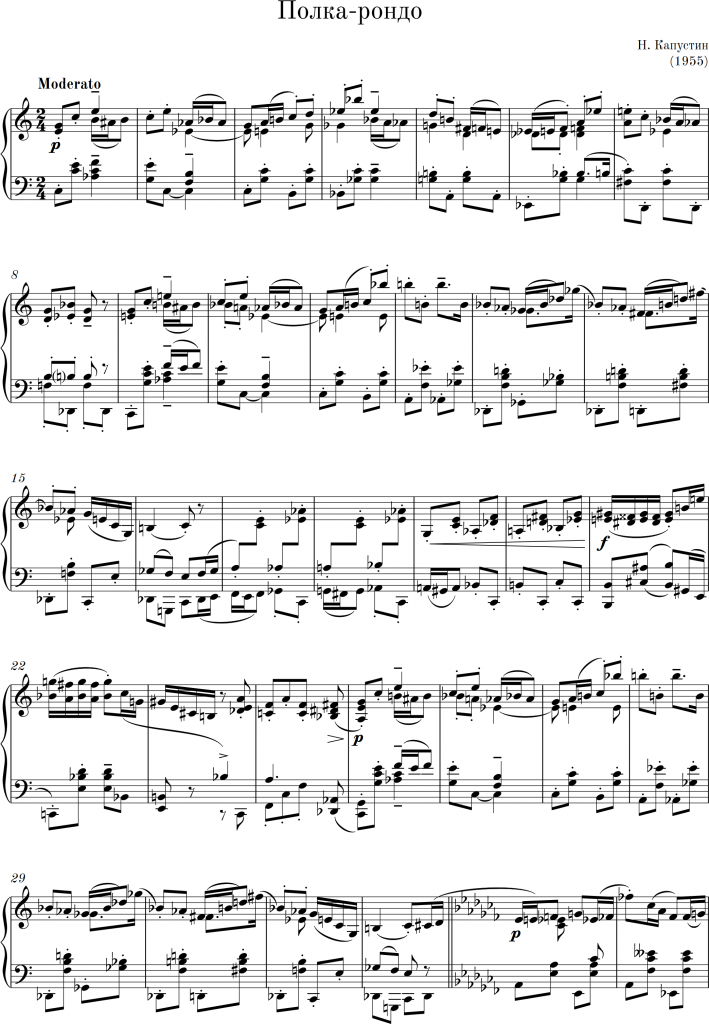 Kapustin didn’t offer much commentary on that work other than it had a very “intense” harmonic language.

This work sounds as if suddenly Kapustin had realized it’s not 1901 anymore. It reminds me a bit of Shostakovich’s early Fantastic Dances Op.5 (from 1922), even though that’s a work Kapustin probably never heard, and he openly voiced his distaste for Shostakovich’s work (whose mature style differed from that substantially). So, where does that similarity come from? It’s because both composers were emulating one of their greatest idols, Sergej Prokof’jev (the other two of Kapustin’s holy trinity were Ravel and Bartók). I may also hear some Kabalevskij, but that’s someone Kapustin never mentions.

Here we find almost all of Prokof’jev’s trademarks: A playful, somewhat angular theme, clearly rooted in C major, but with a very chromatic language that flows from one “unrelated” chord to another.

It is known that Prokof’jev’s method consisted of two stages: the first was writing a pretty conventional theme, in a style that wasn’t that different from his 19th century heritage. Then, in the second stage he “prokof’jevized” it, by making the chords more unconventional, and by and adding “wrong” notes here and there.

In this piece we can see how the old style is “parodied” in the same way: In measure 8 we should have a half cadence resting on a G major chord, but we get instead an altered dominant 7th with several, very dissonant chord extensions and alterations. In measure 24 we “should” have a V-I cadence, but instead we get some “sus”-like chord that resolves chromatically, while in measures 16 and 32 the perfect cadence is preceded by another “sus” chord that includes a G♭ (something that doesn’t belong to the key of C major at all).

We have only the first 2 measures of the first episode of the rondo, but they remind me of Prokof’jev’s late ballets. This piece is my personal favorite from all the excerpts and I’d love to hear it in full. 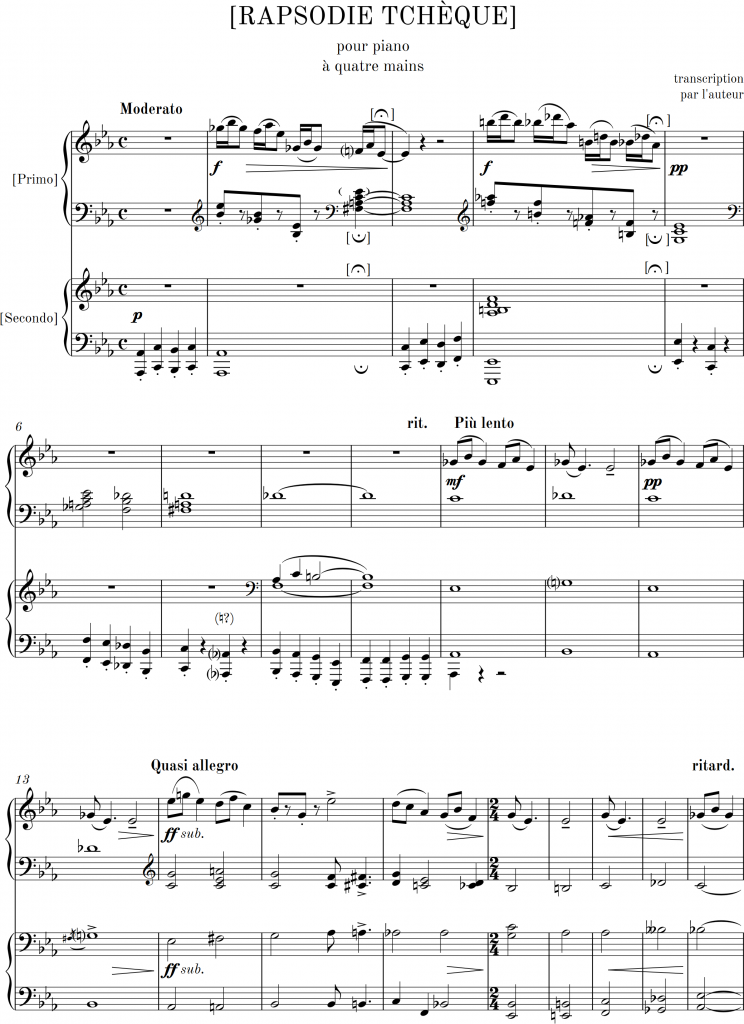 This is the earliest work by Kapustin to include obvious jazz elements (he listened to a lot of Czech jazz). It was performed privately with no other than Aram Khachaturian in the audience, who didn’t like the jazz harmonies. Apparently, it was “too much for him”.

This is clearly just an introduction, I can’t say much without the main theme. It seems an OK work. While some chords have very marked, jazzy “blue” notes, there are many other aspects that seem to point more towards a late-Romantic language (like the opening 2 measures). 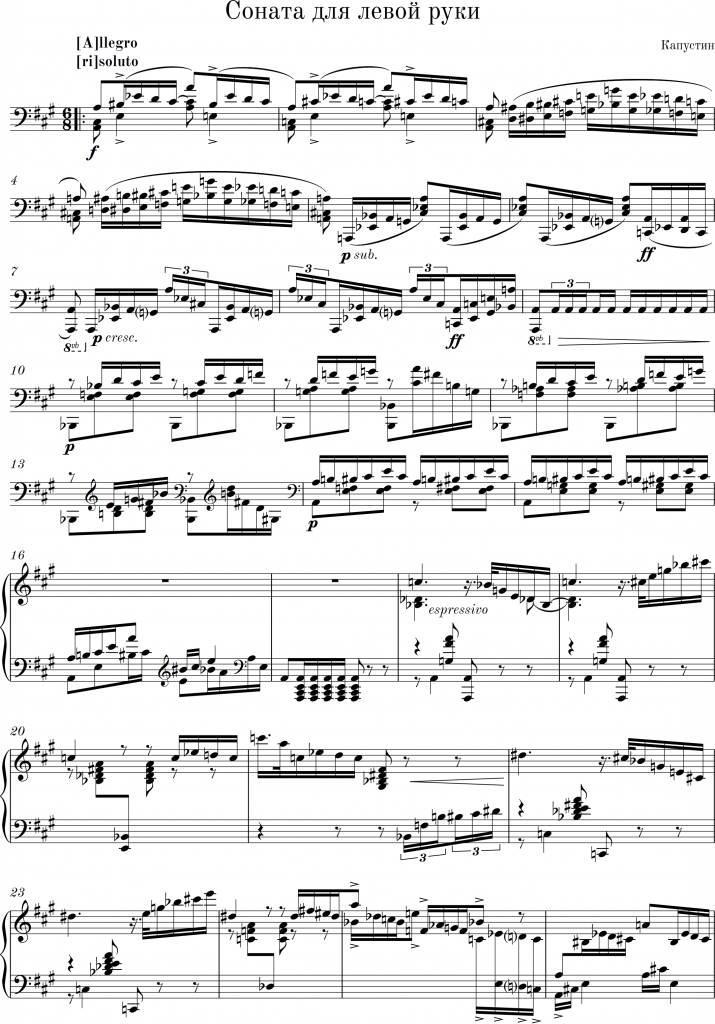 According to Kapustin, this was his last non-jazz, “classical” work, written after he injured his right hand. The except is the first page of the first movement.

This piece seems to be under the influence of Bartók, esp. considering the very insistent use typical octatonic harmonic inflections. Another influence might be Prokof’jev’s War Sonatas. Not even the first theme is included in full in the excerpt, so can’t emit an informed opinion. 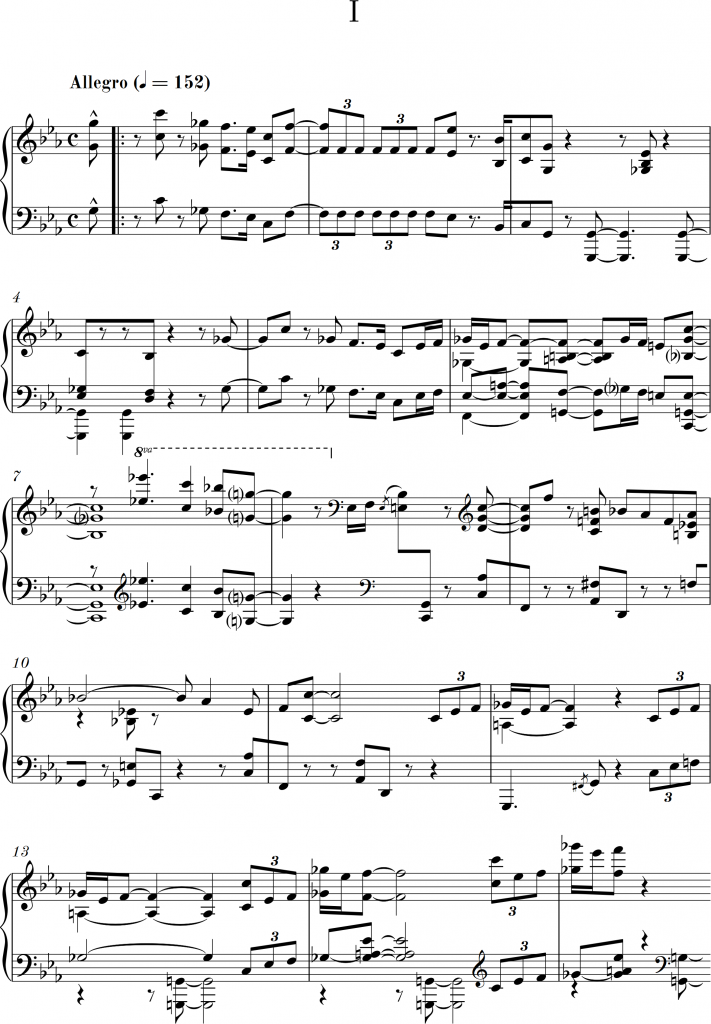 This is “big” sonata is another early piece where jazz elements are used intensively. The composer thought it was a fairly “good” piece, but it had some imperfections (such as transitions), so he believed it didn’t deserve to be published among his opus numbers.

I don’t know… I find the first theme a bit strange. As in the other excerpt, not even the main theme’s included in full, so I can’t emit an informed opinion. However, it’s evident the jazz influence’s much stronger than in the Czech Rhapsody, both in terms of rhythm (there’s a ton of syncopation), and in terms of melody and harmony (the C minor blues scale is ubiquitous).

And with this piece, the excerpts included in the book end. We must keep in mind that Kapustin was quite selective with his early work, so only with his Concertino Op.1 for piano and orchestra did he decide his work was mature enough to deserve an opus number. Several early Kapustin pieces will probably surface in the following years, both from his personal archive and from the documents held by the heirs of the Oleg Lundstrem orchestra.